Apple on Thursday revealed its iTunes Rewind selections for 2011, revealing the best music, applications, TV shows, movies, books and podcasts of the year.

Apple has also broken the list of apps down into iPad and iPhone releases, while naming an App Of The Year for both as well as a selection of runner ups. 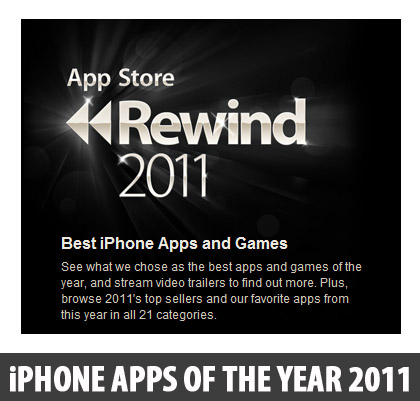 For its iPhone app of the year, Apple has chosen Instagram, the photo-sharing social network that has taken iOS by storm. Listing the filters as a big plus, Apple believe that with Instagram it is ‘near-impossible to take a bad shot.’

The top game is, predictable, Tiny Wings. Having really established itself as one of the most-played games on iOS late in the year, this game has kept many people quite for hours on end.

Facebook for iPhone lets you stay connected and share with friends on the go. Start a chat, keep up with friends’ photos and status updates, look up a phone number, upload photos to Facebook and more—right from your iPhone.

Pandora Radio is free personalized radio that only plays music you’ll love. Just start with the name of one of your favorite artists, songs or classical composers and Pandora will create a custom “station” that plays similar music.

Play the free version of Words With Friends — the game more of your friends are playing than any other word game!

Experience for yourself why more than 20 million people are addicted to the word building, triple score seeking, chat bubble sending goodness of Words With Friends.

Call, video call and instant message anyone else on Skype for free with Skype for your iPhone or iPod touch.

Plus call and text your Contacts (or any other number) at Skype’s low rates. It’s great value with Skype Credit.

Skype for iPhone, iPod touch and iPad is free to download and works over 3G* or Wi-Fi.

Just download this free app and you can instantly watch TV shows & movies streaming from Netflix.

What happens when everybody’s favourite fierce fowl get caged and shipped to Rio? They get very angry!

In Angry Birds Rio, the original Angry Birds are kidnapped and taken to the magical city of Rio de Janeiro, where they eventually escape their captors and set out to to save their friends, Blu and Jewel – two rare macaws and the stars of the upcoming motion picture, Rio. Angry Birds Rio will pair the physics-based gameplay of the original game with unique twists based on the film.

Expect plenty more where this came from: Episodic updates throughout 2011!

Groupon features deals on the best stuff to do, see, eat, and buy in more than 500 cities and eleven fiefdoms around the world. Our unbeatable deals typically weigh in at discounts of 50-90%, ensuring a level of access to your city that’ll put the mayor in a jealous rage. We handpick every deal to ensure that customers can confidently embrace salsa lessons, hot air balloon rides, and hand-tossed pizzas. Daily deals are signed, sealed and delivered to phones each morning, while thousands of deals on demand can be found in real-time, ready for immediate use with Groupon Now!

Download the Groupon iPhone app to explore the nooks and crannies of your favorite neighborhoods.

Millions of players all around the world are enjoying Fruit Ninja and its constant supply of free updates and new game modes – and now for players who haven’t yet had a taste, Fruit Ninja Lite is ready to download at no charge!

The simple yet incredibly satisfying gameplay of Fruit Ninja is ready for action in Fruit Ninja Lite, which features a sample of Classic Mode, the exciting first game that started the phenomenon! Simply swipe the screen to deliciously slash and splatter fruit like a true ninja warrior – but be careful of bombs, which will put a swift end to your juicy adventure!

In Fruit Ninja Lite you can even get a taste of the Dojo, where your success in game can unlock awesome new backgrounds and blades! There are also a small sample of achievements to unlock, with three exclusive to Fruit Ninja Lite! You can also post your results on Twitter and Facebook, showing off your ninja skills to the world!

Follow your interests: instant updates from your friends, industry experts, favorite celebrities, and what’s happening around the world. Get short bursts of timely information on the official Twitter app.

Real-time search reveals breaking news, while trending topics show what’s happening now around the world. View trends, browse your interests and see suggested users in several categories, including fashion, entertainment and travel, or search to find out what people are saying about topics you care about, such as politics or big sporting events.