Flux slider with CSS3 image transition framework, inspired in part by the fantastic Nivo Slider jQuery plugin. Instead of the traditional Javascript timer based animations used by jQuery, Flux utilises the newer, more powerful CSS3 animation technology. Its in a fairly early/rough state at the moment but testing on the iPhone/iPad does appear to produce much smoother animations. Desktop performance (as with Nivo) is very smooth but the use of CSS3 enables us to produce some new effects that Nivo can’t, e.g. rotations. 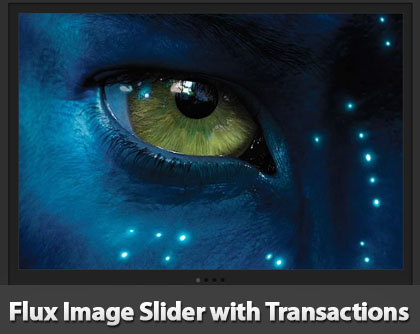 The aim is to use hardware acceleration where possible to improve performace on less powerful devices, such as mobiles & tablets.Flux requires a browser which supports CSS3 transformations and has been built to use either jQuery or Zepto.js as they share the same API. For mobile deployment Zepto is recommended due to its <5k deployment footprint.