There are millions of photographs, but how we choose the best one, Photos are invaluable asset for professional designer. However when it comes to finding the right photo; one can easily spend hours searching for it. Creative photos to refresh your mind at getting people’s attention as long as you don’t make them too text heavy and you include an extremely creative photos in look-at-me colors and sharpness. 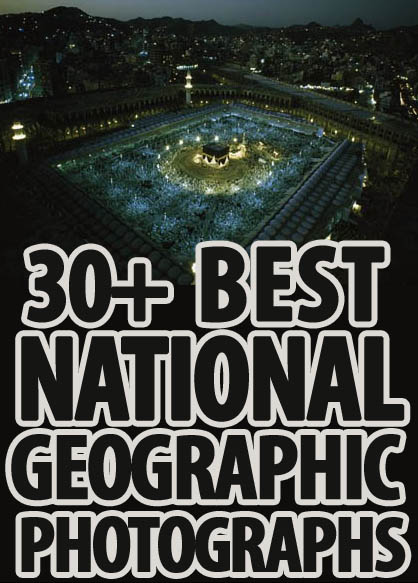 If you are looking to add some creativity and inspiration to your life, you probably need check  30+ best photographs from national geographic displayed has been hand picked that inspires you to create something creative and original.

Throughout history, great photographer always found new ways to show their creativity to express themselves and create new trends and techniques to remark their work apart from the rest of the crowd. Photography is an art in itself, that requires a skill and precision as we know, it is one of the most creative art-forms to come out of the digital age.

A quarter million Muslims jam Haram Mosque in the holy city of Mecca to pay homage to Allah. Those in the center (blurred in this time exposure) circle the black-draped Kaaba, most sacred of Islamic shrines. Muslims believe the Prophet Abraham—like Muhammad a messenger of God—and his son Ishmael built the first structure here. Photograph by Thomas J. Abercrombie 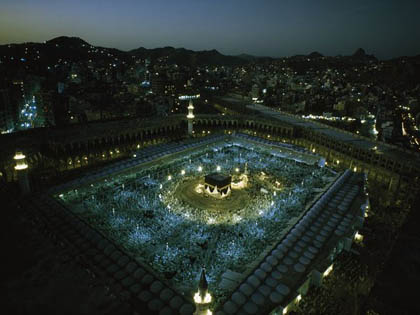 Reindeer cross the Siberian snow near Oymyakon, in the U.S.S.R. A young girl atop one of the animals herds them forward toward her family’s tent and a break for food and rest. Photograph by Dean Conger 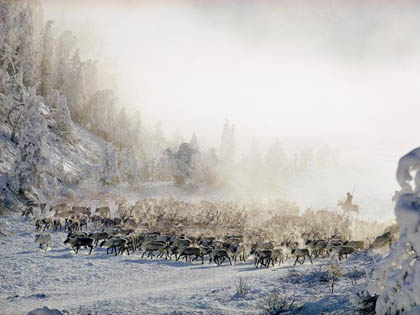 With 10,000 watts of light and cutting-edge submersible technology, the Titanic comes to life from two and a half miles beneath the ocean’s surface. Photograph by Emory Kristoff 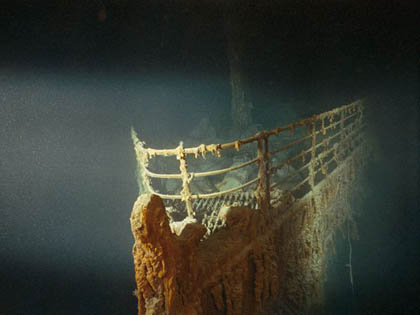 Rolling through the snow, Prince Philip takes his four-in-hand carriage out for an early morning drive along a path near Windsor Castle. Photograph by James L. Stanfield

Scorching sun casts long shadows as camels cross the salt flats of Lake Assal, Djibouti, one of the lowest places on Earth at 512 feet below sea level. Photograph by Chris Johns 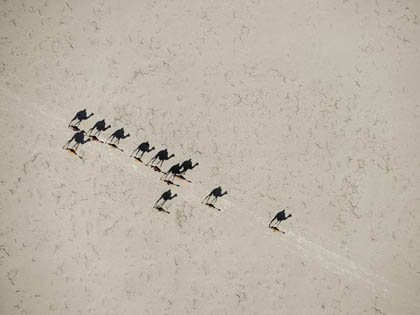 Tail of Plane in Flight

A 23-second exposure in a camera mounted in the tail of a Lockheed TriStar jet captures the lights of the airport runway and the city beyond. Photograph by Bruce Dale

Arrows of rain seem to pelt a dragonfly in Indonesia’s Riau Islands in “Splashing,” the winning image of the 2011 National Geographic Photography Contest. Photography by Shikhei Goh 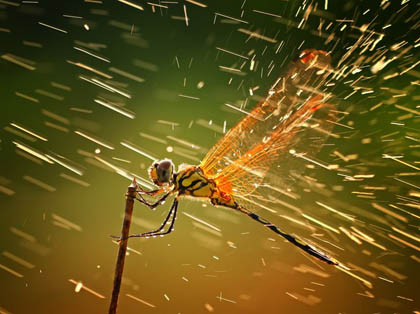 “The blue pond” of the famous tourist resort. This is a place where many tourists gather in spring, summer, and autumn. However, since this pond freezes in winter, nobody is during that period. This photograph is the moment first snow of the season is falling in that blue pond. We can see first snow of the season from the end of October. Why is blue? This is because the underground hot spring ingredient is gushing. This blue pond changes a color every day. I think that mystical blue and pure white snow are beautiful. All are nature’s tints. Photography by Kent Shiraishi

Jellyfish Cotylorhiza tuberculata drifting just beneath the surface looking for capturing the first sunrays to trigger their symbiotic algae to produce energy for it. Photo by Angel Fitor

I was leading a photographic safari in Tanzania’s, Serengeti National Park. It was midday and we came across a dazzle of zebra approaching a waterhole the quench their thirst. Every few minutes the zebras will enter the water to drink, just to panic and scatter out of the water again. Photo and caption by Marius Coetzee

I personally believe that, beyond the formal representation of reality, mediated by the technical instruments necessary to fix an image in time, photography is made of insights. The shot is the last act of image capturing and in many ways the easiest part of the whole process. This panning effect, even in its imperfection, with the chromatic harmony of the background, with all the needless information eliminated and the luck of having the big cat’s lifted tail in symmetry with the impala horns, brings the observer inside the hunting without distractions. Photo and caption by Stefano Pesarelli

Beluga whales in the arctic having fun. Photo by dafna ben nun 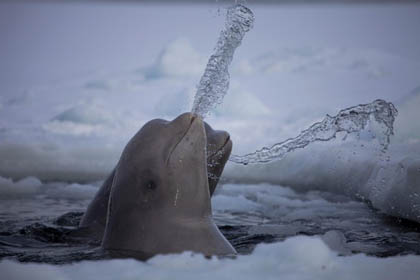 Once a year, Formosa fishermen’s unique sulfuric fire fishing ritual handed down from generation to generation. Photo by Hung-Hsiu Shih

Space Shuttle Endeavour STS-130 launches into orbit toward the east, as the stars and waning crescent moon trail toward the west, leaving a beautiful reflection on the Intracoastal Waterway in Ponte Vedra, Florida. This 132-second time exposure of the final night launch of a Space Shuttle, from launch through SRB separation, was taken 115 miles north of Launch Pad 39A at Kennedy Space Center. Photo and caption by James Vernacotola

Krishna Temple is one of Hampi’s notable Hindu temples. This photo shows the most beautiful architectural piece of Hampi and how people just feel in it. It is a place of calm and equilibrium, an escape. Photo by Alejandra Loreto 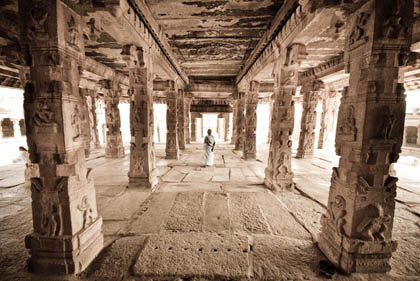 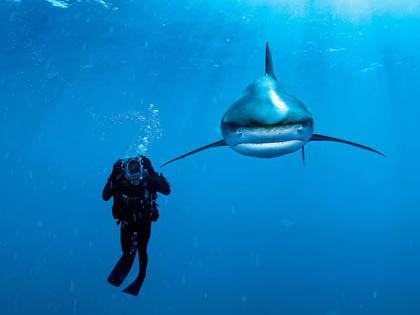 On the trail to Goodnow Mountain, a yellow birch appears to be ingesting a boulder left behind by a glacier. With its tenacious trees and rebounding wildlife, Adirondack Park is a miracle of regeneration. Committed advocates and legal protections written into New York’s state constitution offer hope that it will remain forever wild. Photograph by Michael Melford 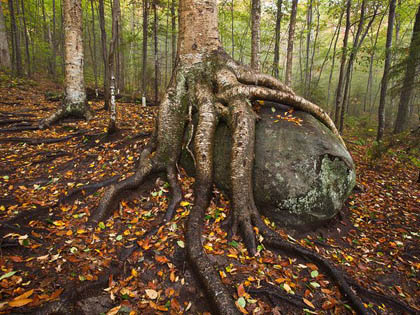 Every year around the month of October, Dubai experiences heavy fog due to the still-high humidity and the falling temperatures. With all the new high-rise buildings (including the tallest in the world, Burj Khalifa) this provides a great photographic opportunity. Photograph by Catalin Marin

While working as a field researcher for a biodiversity study on pine plantations in North Carolina, I found this Agkistrodon piscivorus in a drainage ditch. It’s seen here displaying the classic defensive posture that gives it the common name “cottonmouth.” Photograph by Jared Skye

The Elephant Festival is one of the most popular festivals in Jaipur and takes place at the famous Chaugan Stadium in March. It begins with a beautiful procession of bedecked elephants, camels, horses, and folk dancers. The mahouts proudly embellish their elephants with vibrant colors, jhools (saddle cloth), and heavy jewelry. Photograph by Marjorie Lang 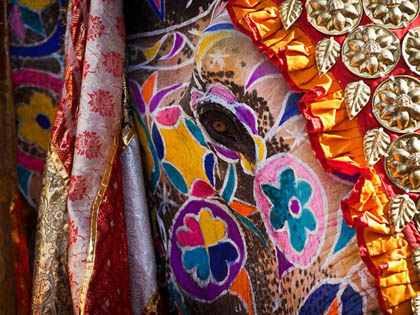 Beautiful frost at sunset in Alberta Photograph by Dwayne Holmwood 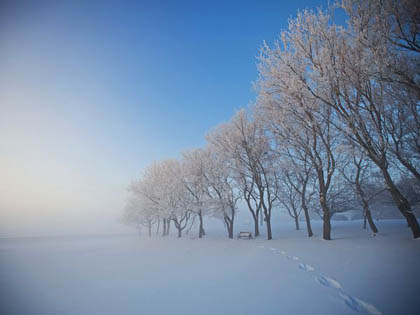 Tinted orange by the morning sun, a soaring dune is the backdrop for the hulks of camel thorn trees in Namib-Naukluft Park. Photograph by Frans Lanting 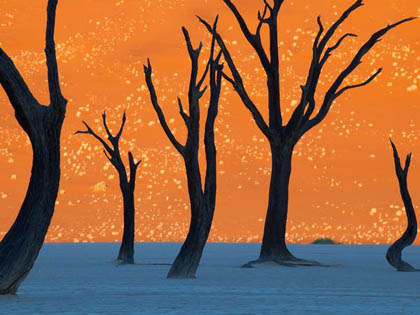 In the untamed early days of the American West, pronghorn like those pictured here in Wyoming’s Grand Teton National Park were plentiful and proud and moved freely. Driven by the seasons, their migration from the mountains to the valleys and back has always been a tough journey, but now fences, borders, bloated rivers, and other constraints have created blockades and bottlenecks that result in devastating losses for this critically endangered species. Photograph by Joe Riis 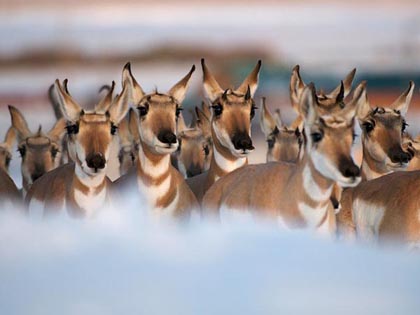 White pelicans are among the largest Mississippi Flyway migrants. At an average weight of 16 pounds (7 kilograms), they rely on a nine-foot (three-meter) wingspan to enable flight at very high altitudes. They use a unique fishing technique, cooperatively herding fish into small areas on the surface where the pickings are easy. Photograph by Annie Griffiths

Aerial view from a helicopter of the tulip field at the Table Cape Tulip Farm on Table Cape, near Wynyard, on the North West Coast of Tasmania. It was Blooming Tulips Festival Day at Wynyard and fortunately for me and my six-year-old grandson, the helicopter operator was selling 15-minute joy-flights. On the left-hand end of the rows of tulips you can see some of the visitors to the farm’s open day. Photograph by Anthony Crehan

In Botswana, one of the largest zebra migrations on the continent takes place each year, as some 25,000 zebra follow the rains and cross from the Okavango Delta to the Makgadikgadi Salt Pan grasslands to the southeast, stopping at hundreds of water holes along the way and eventually returning westward to the Okavango Delta. Photograph by Robert B. Haas 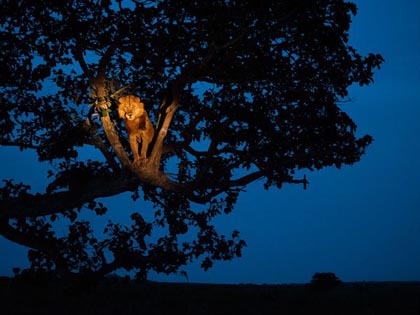 Young male polar bears spar under the low light of winter in Svalbard, a cluster of islands halfway between Norway and the North Pole. Polar bears thrive here—roughly half the estimated 3,000 bears in the Berents Sea population raise their young on the archipelago’s isolated islands. Photograph by Paul Nicklen

An unexpected side effect of the 2010 flooding in parts of Sindh, Pakistan, was that millions of spiders climbed up into the trees to escape the rising floodwaters; because of the scale of the flooding and the fact that the water took so long to recede, many trees became cocooned in spiderwebs. People in the area had never seen this phenomenon before, but they also reported that there were fewer mosquitoes than they would have expected, given the amount of standing water that was left. Not being bitten by mosquitoes was one small blessing for people that had lost everything in the floods. Photograph by Russell Watkins 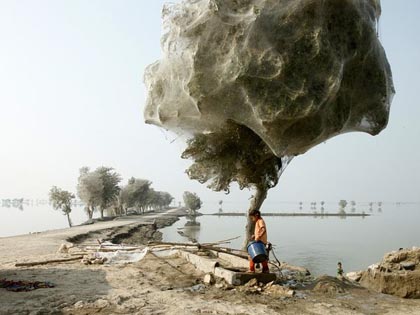 An air bubble ascending from the ocean floor contorts and twists into a semicircle as a wave breaks in the background. Captured as part of the Underwater Project. Photograph by Mark Tipple

That’s Cleopatra on the left side of a wall at a temple at Dendera—one of the few images that bear her name. She is shown fulfilling her role as pharaoh by making offerings to the gods. The appearance here of her son by Julius Caesar is propaganda aimed at strengthening his position as her heir. He was captured and executed shortly after her demise. Photograph by George Steinmetz 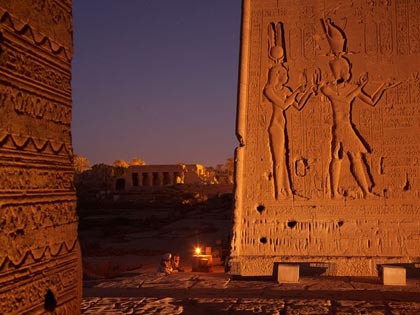 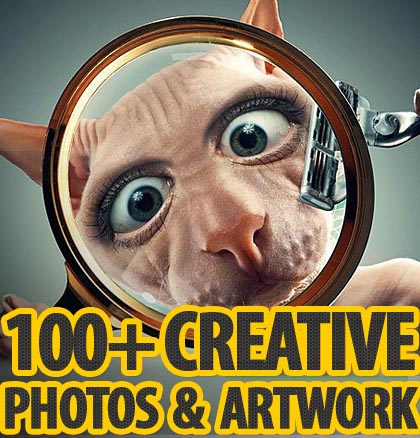