UI and UX Essential Components for Your Web Presence

Technology has become a part of our daily lives and understandably has become more intricate with passing time. Software companies have to keep on upgrading their technology and gadgets in order to avoid becoming obsolete, even simple technology; in order to remain in use has to become more complex, a case in point being the iPhone. 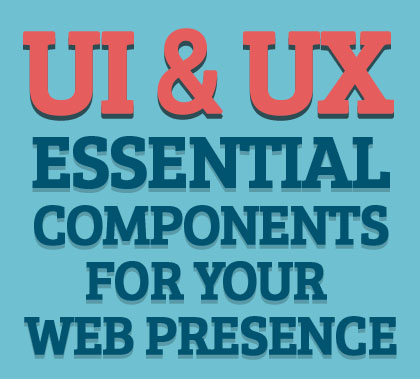 Once upon a time, computers were considered as the state of the art gadgets that were used by scientists to work out complex mathematical calculations and are used in big companies and organizations to store their data. Today, they are so commonly used that they do not come with a user manual anymore. People who use computers on a daily basis for many hours per day for many decade are still uncovering many hidden wonders and surprises like new types of features and short cuts that they haven’t heard of before.

Technology although becoming increasingly complex, still continues to intrigue many people, even those who are not familiar with technology of tech savvy. There are many grandparents who use smart phones which, although may look complex, is actually quite easy to use. Another advantage of the increasing widespread use of technology is that there is a rise in the purchase of laptops in many third world and developing nations. This is a good thing because the digital divide or the disparity in the use of technology is becoming less.

But the purposes and advantages that technology has to offer is ultimately lost if the people in such nations do not know how to use technology that is in their hands.

You can drive, can’t you?

Complexity in technology isn’t just limited to the type of software that you use of your smart phone and computers. It can also be seen in things like customer service menus, universal remotes, DVR’s and yes, even the vehicles that you drive. For example, the Kia Sportage comes with not just one, but five user manuals, all several inches thick.

The Kia comes manufactured like all other cars, having the same controls as other cars, the various switches for wipers, headlights, gearshifts and horns. These details are standard and that even if someone wants to drive away in your Kia; they can at least operate it at a basic level if they don’t know how to operate the other features of the car.

After years of standardization and tradition, this is a new form of user interface. Technology and science has approached an entirely different piece if technology, which hopefully after many trails you may just be able to figure out how to operate it without actually breaking it.

There are many people who being unfamiliar with technology are actually “afraid” of it, they are in fact hesitant to try the controls of any new form of technology as the controls appear to be difficult (and they are) , these people may not be wrong. The controls on many gadgets have become increasingly tough. This “techno phobia” confuses the average user who may get intimidated by complex technology which may hinder them from purchasing and using technology with that level of complexity. From a marketing and advertising point of view, this means product failure at a catastrophic level.

There are two sides to every story complex technology can be either good or bad, based on your experience. The point being driven to that is if technology is too complex for the average consumer, he or she will ultimately not purchase it as previous experience may have put him/her off. Any producer knows that this may affect the flow of sales of the said gadget.

Author: John Smith
John is an American freelance UI/UX graphic designer and has been working in this field for 5 years. He also writes for other blogs, His biggest passion is blogging and loves all things design and technology. You can follow him on Twitter