Google Will Retire Picnik Along With Other Services

Google has again decided to close down some of its services which over the course of the past whole year have not performed and given results according to its expectations. The major one of these Google services that will be shut down is Picnik, which is liked and used by millions of people around the world for its user friendly interface.

It is again one of those services that Google bought because of their popularity as an online tool and with a hope that through Google they would be even more successful. Picnik was bought by Google two years ago but unfortunately for Google and the website’s fans it will be closed on April 19. Till then users who have already paid for its premium services will get a full refund and others can try it for free. Though some of the editing tools used by Picnik will be shifted to Google+ in April so that the social networking site can attract more users. 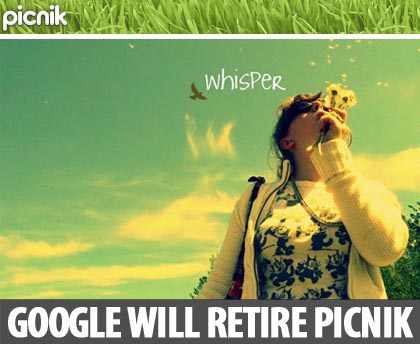 The main reason that Google has stated for retiring these online products is because they “replicate other features, haven’t achieved the promise we had hoped for or can’t be properly integrated into the overall Google experience.”

The following other services are being taken off:

Google Sky Map, on which Carnegie Mellon University will collaborate to further develop as a series of student projects.

Urchin, its licenses will not be available after March 2012.

Google wants to achieve a comprehensive user experience and it feels that these services were not fit any more to be the part of it. Some of the other online services that users can avail instead of Picnik are, FotoFlexer, Phixr, befunky, and iPiccy besides others.