There is another new prediction about Facebook, which has already established itself as the world’s largest social networking site. This time, it is about to get even bigger. There is nothing surprising about this news although. For Facebook sky is the limit. According to the global digital marketing firm, iCrossing’s senior analyst, Gregory Lyons, Facebook will have 14% of the world’s population as its users by August of this year. This means around a billion people.

At this moment, Facebook has a membership based on 800 million people. This figure came out around October in 2011. Within this time period, by August, it will be 200 million people more. This will be a new milestone for Facebook and indeed for social networking. Social media is ever growing stronger because of the many voices it can represent from all corners of the world. 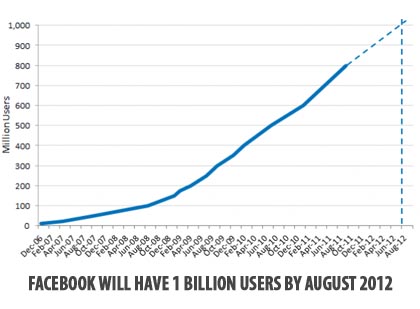 Despite Facebook’s competitor in the market, Google+ has seen such rapid growth within a short time that even Facebook did not experience initially. Though social networking was already on the go with MySpace and Orkut having a huge membership in their days of prime, but Facebook changed the way people social networked. Most users of these other social networks have switched to using Facebook and to verify this, answer this question yourself about which social network do you prefer.

Facebook is everything that users look for online social connectivity. Google+ has an advantage of having trends set for it by Facebook. It is just merely following. The need is for it to follow well. But being a follower is a different position than being a leader. It is clear which one is better. It is the leadership in Facebook that has made it reach the milestone that no one has as yet in social media.

What is more interesting about this news this that users from developing world will help Facebook achieve this user base, especially users from Brazil and India who previously were tilted toward using Orkut. This growth in users has fast track Facebook’s IPO which many expects to be at $10 billion. This will be another record for Facebook as only three other U.S. companies have had IPOs worth more than $10 billion, which are AT&T at $10.6 billion, GM at $18.1 billion and Visa at $19.7.