Facebook is not just growing larger in its user-base but also expanding economic opportunities for in areas where its centers are opening up. According to the joint study released by Facebook and Deloitte, the social network has helped add $15.3 billion to the European economy and provided 230,000 jobs in Europe in 2011.

Recently the Digital Life Design conference was held in Munich and the report was released there about how social media can help in reshaping economic capacity by producing further job space and scope. Facebook has also announced to give €100 in credits to 50,000 European businesses for marketing on the site in collaboration with other local partners. 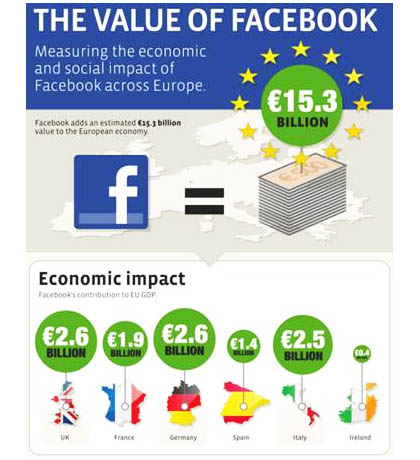 Success of joint ventures like that of Spotify is classic in Facebook’s history due to its success. Spotify added 7 million additional users in the past six months since its launch in the U.S. and now has about 2.5 million paying customers. Facebook has not only managed to support such joint ventures but also been a great hope for other brands that use the social network for their social media marketing and promotion. With this kind of a connection that a brand gets through Facebook, its global audience has increased and thus can now reach out to more people.

This new phase of social media getting businesses to expand further beyond borders is going strong and if such marketing has produced results, then the trend can be here to stay. The conventional media has something to think about when it comes to advertising, because Facebook is giving brands an exclusive chance in this way. Facebook is earning big bucks in return with such marketing and economic transactions taking place through its medium.