Few days ago Mozilla release Firefox 7, now Mozilla has rolling out Firefox 8 beta 1 to public for testing and according to Mozilla wiki the final Firefox 8 will reach in November 2011.

Firefox 8 now has Twitter search built into its search feature by default, making it easier to search for tweets inside the social network. If you’re an avid Twitter user, you’ll likely enjoy this change, but it probably won’t be a decisive feature if you’re thinking of switching to Firefox. Nonetheless, Twitter is becoming increasingly becoming popular, so it’s good to see Twitter more deeply integrated. 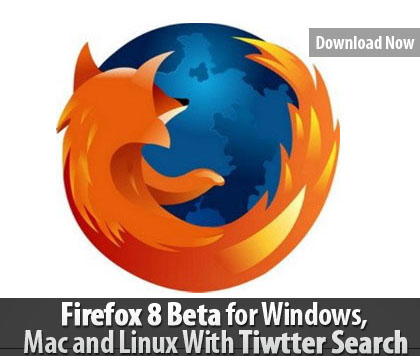 In addition to new feature, Firefox 8 includes the usual technology and engine upgrades, such as support for addition HTML5 technologies. There are also said to be across the board performance improvements.

You can download Firefox 8 beta 1 for your required operating system via links below.