According to the WSJ the coming iPhone 5 which is expected in September 2011, will be more thinner and lighter as compare to its predecessors. 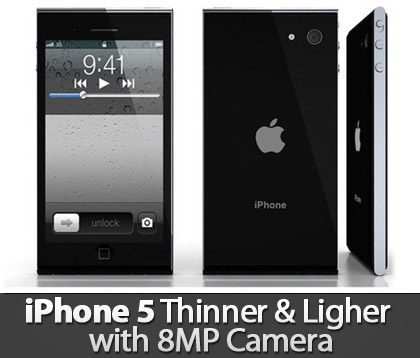 Among those parts, an 8-megapixel camera is expected, which most indicators indeed point to, according to previous reports. Apple is said to have fairly aggressive sales projections for the next iPhone, since it has allegedly ordered as many as 25 million units to be produced until the end of the year, according to the source:

Apple’s sales estimate of the new iPhone is quite aggressive. It told us to prepare to help the company meet its goal of 25 million units by the end of the year, […] we were told to ship the components to assembler Hon Hai in August.

Hon Hai is the world’s biggest contract manufacturer, based on revenue figures, and has assembled several Apple products in the past. While most iPhones have been traditionally assembled by Foxconn, another contract manufacturer based in China,Apple has been diversifying its suppliers in order to improve efficiency. Hon Hai has previously expressed its frustration with assembling Apple products, claiming it’s hard to cram so many components together in order to create Apple’s legendary “thin” products, as voiced by Terry Gou, Hon Hai’s Chairman:

The touch-screen devices are so thin. It’s really difficult to install so many components into the iPhones and iPads,

The contract manufacturer hopes to improve profitability by increasing volume, which might become a reality if Apple shifts more of its manufacturing power to Hon Hai. Meanwhile, spokespersons at both Hon Hai have refused to comment on recent rumors.

Apple, despite being the third largest US mobile phone brand as of April of this year, doesn’t make a single iPhone. Instead, it hires outside companies, most of them based in the Far East, to assemble the products using Apple’s brand. Currently, most modern hardware makers don’t manufacture most of their hardware, allowing them to keep manufacturing costs as low as they can be.

Most rumors have suggested that the next-generation iPhone will look identical to the iPhone 4 and instead focus on the internal hardware, with spec boosts such as a dual-A5 processor expected. Yet, once in a while, rumors of a redesign pop up, such as this one.

We’ll have to wait until September, the month the next iPhone is expected to be unveiled.

According to Apple’s suppliers company has a goal to prepare 25 million iPhone 5 units by the end of year. It is also said that Apple is experimenting with new way of charging the iPhone, and it is working on a less-expensive phone with new features such as an edge-to-edge screen.